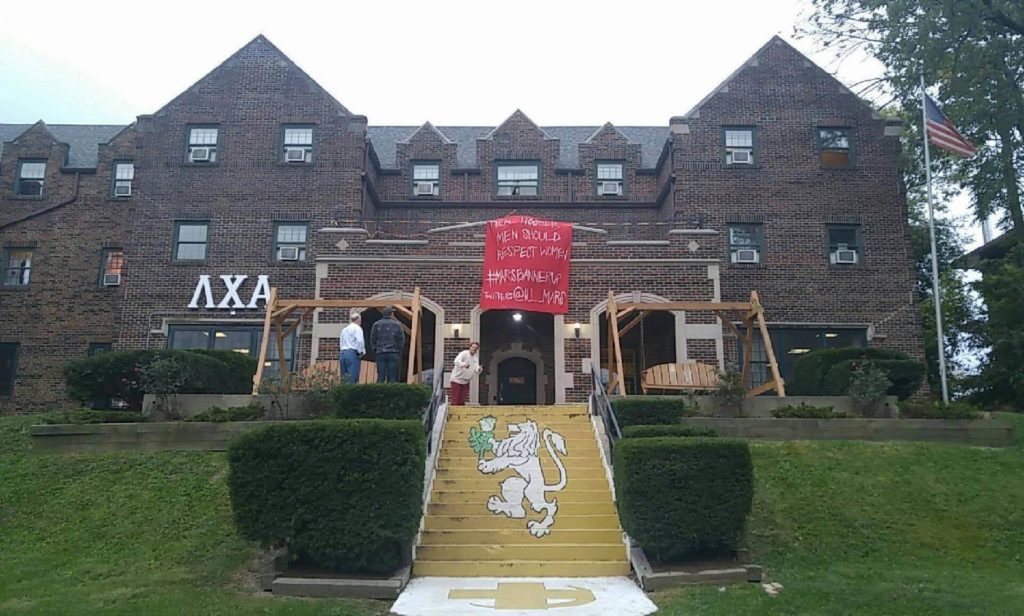 In 2015, former prep school student Owen Labrie, 19, was convicted of statutory rape-related violations against a 15-year-old girl. The story that emerged around his case was not one of an outlying lone-wolf perpetrator whose capture made the campus safe. Rather, reports depicted a school culture where sexual targeting of younger female classmates is the norm.

That doesn’t mean everyone there is a sexual predator. It means that the sexual targeting is part of the culture. It even has a name. (In this case, at St. Paul’s School, it’s called the “Senior Salute.”) People know it’s going on. Not everyone likes it. But it’s systematic, intentional, and, if not necessarily celebrated by all, then often shruggingly accepted. Because it is so often an open secret, it is used as a way to blame survivors of rape for the very violence someone chose to commit against them. Survivors are told that they “should have known better.” In a statement (disputed by St. Paul’s), the victim’s family described the boarding school as fostering “a toxic culture that left our daughter and other students at risk to sexual violence.”

This is Rape Culture 101. This is what we have to change.

Cases like this grab headlines in part because they offer a salacious peek behind the leafy, manicured scenes of elite prepdom. But they underscore the urgent need to eradicate the culture of violence and discrimination against women and girls in our society. In our society, and across our society. Sexual violence — and the culture that fuels it — is everywhere, although it can look and feel different depending on where it lives. In elite schools, as well as community and technical schools (or at no school at all), in the military and in law enforcement, in pop culture and academia, everywhere; anyone of any gender or orientation can commit or be a target of sexual violence.

Lately, and with plenty of reason, Breakthrough — along with many ally groups, as well as national conversation — has focused on the need for culture change on individual college campuses and within the broader world of higher education. But the norms, beliefs, and behaviors that allow sexual assault to persist do not magically appear during the summer between high school and freshman year. This culture gets brought to college by younger students who learned it earlier on — and there it is reinforced.

Among millennials, 53 percent say that sexual assaults are somewhat or very common in high schools. 15 percent report that they have been sexually assaulted; 34 percent report that a close friend or family member has. 44 percent of sexual violence is committed against women under 18 years old, 15 percent against women under 12 years old. Because many rapes are unreported and therefore uncounted, we don’t know the true levels of sexual assault of women and girls, let alone within communities where specific barriers to coming forward exist such as with male victims, LGBT victims, immigrant victims and others.

We must make change, and we believe that the most powerful change comes from within. On campus, and from members and leaders in the Greek system — fraternities and sororities, usually seen as the problem, never part of the solution. Last semester our organizations — Breakthrough and IU MARS (Men Against Rape and Sexual Abuse) — joined forces to support and drive culture change at Indiana University. IU MARS was founded specifically to work with men who are part of the Greek system and has had more than 200 members since its founding. Members plan and hold campus-wide events to raise awareness of the issue of sexual assault, but also meet regularly throughout the semester to have deeper conversations about what factors — such as gender norms, alcohol, pressure to have sex, and more —play a cultural role at IU.

The targeting of younger women by upperclassmen—especially during the women’s first semester—is an all-too-common aspect of campus sexual violence as well. At IU the perception among many is that you are being dropped off at a university with a nationally renowned basketball team and a social scene that doesn’t fall far behind. Nobody talks about the culture you’re about to enter, frankly because nobody wants to. First-year students may soon find themselves exposed to drinking and social interaction in heavy, fast doses. In this IU is hardly unique.

Since the story of Owen Labrie broke—and after the news of a fraternity at Old Dominion University, and others, hanging banners publicly calling for the targeting of first year women (and their mothers)—MARS and Breakthrough have doubled down on creative ways to change the culture on campus. One result: the “Banner Up” campaign, which launched in October.

MARS and the IFC (interfraternity council) at IU unveiled banners at Greek houses across campus with messages about campus culture, sexual violence, and survivor resources. It is a simple but concrete — and highly visible — move to talk about and challenge the ha-ha “frat boys will be boys” acceptance of sexual violence. We hope it will model culture change from a bunch of guys who usually are not thought of as caring about the issue of sexual violence at all—and cause students, faculty, administration, parents, and alums to do a double take, and take action.

This problem is too big to solve with case-by-case prosecution. We need to transform the elements of culture on our campuses and in our communities that promote and excuse violence. The good news is, you don’t have to be headed to Harvard to know how to do it. We all have the power to stand up and say “hey, that’s not okay.” Especially when we do it together.