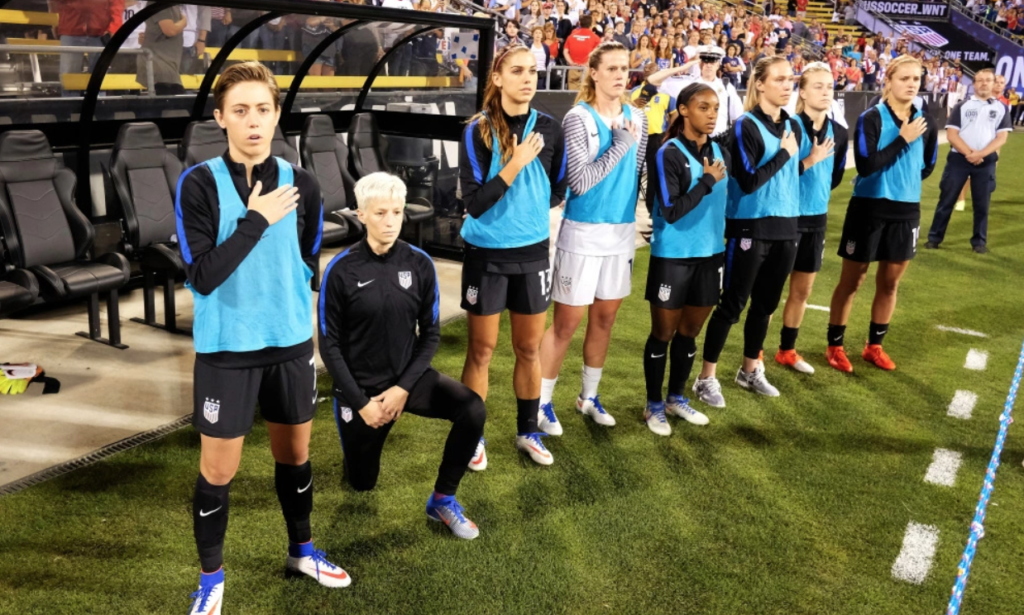 Athletes are more than just players on a field, teammates on a court, or partners in a match. Athletes use their voices and actions through their respective sports. Professional athletes from all around the world have either faced or witnessed problematic instances of social inequality. Social justice and sports have collided for decades and formed a reciprocal relationship: athletes use their platforms to raise awareness about issues of social justice, whether it be because of a personal experience or just simply to speak up on a controversial issue. Although athletes continue to use their voice to express their political opinions, some receive more and more backlash. It is understandable that people may not want to hear political statements during sporting games, however, it is crucial that athletes take a stance on prominent political topics on or off the field.

In 2016, Colin Kaepernick, former San Francisco 49ers quarterback, prompted a much needed conversation about promoting basic human rights. He ignited a movement by first sitting, then kneeling during the national anthem to shed light on racial injustice in the United States. He said, “I am not going to stand up to show pride in a flag for a country that oppresses Black people and people of color.” While Kaepernick was aware that some may not respond well to his protest, he willingly immersed himself into controversy. He wasn’t afraid of the consequences. He was determined to fight and to stand up for people that are oppressed. As may have been expected, Kaepernick’s refusal to stand brought incredible backlash to his career. He has essentially been blacklisted from the NFL.

It’s interesting to look at the cause and effect relationship of Kaepernick’s situation. He stood up for a social justice issue on the field, but has now gained one of the worst reputations in the sports world. I believe that Kaepernick is a positive influence in the sports world and that he should have gained more recognition for the positive impact he created, rather than the negativity he received.

It is honestly nonsensical that someone should be punished for taking action, especially when that person has the full right to do so. We shouldn’t question someone’s reason for fighting for social justice. We should emphasize that voice. As a society, we need to be more open minded about situations like Kaepernick’s. Those protests and acts of fighting for social justice are the small steps that will eventually lead to change in our world.

Kaepernick’s situation is a prime example of what being a leader means. He jeopardized his own career to encourage change for social injustice in the Black community. He did not ask for approval before taking action because he decided he did not need the validation from his team or the media. It started with Colin Kaepernick. It cost him greatly, but Kaepernick’s priority was to publicly express his beliefs so that he could make an impact.

Kaepernick has left a legacy for athletes who seek to encourage change for social justice issues. In a match against the Netherlands in September 2016, Megan Rapinoe, captain of the U.S. Women’s National Soccer Team, knelt during the national anthem in support of Colin Kaepernick’s silent protest against police brutality. In fact, she was one of the first white professional athletes to demonstrate solidarity with him. She was booed by her fans in response to her kneeling, but Rapinoe claims to have no regrets about taking a knee during the anthem. Her fearlessness and bravery to fight for social justice issues has been a major part of her career.

Kaepernick and Rapinoe have different racial identities, but they have both used their platforms to speak out on behalf of marginalized communities. Despite the outcome of their situations, they were both driven to fight for positive social change. As Nelson Mandela stated, “Sport has the power to change the world.”

But will future athletes continue to use their voices even if it results in major consequences for their careers? Will coaches start to understand where their athletes are coming from when they speak out on heated political topics? Clearly, these questions are difficult to answer, but we can only hope that athletes do use their actions and voices to inspire change. Athletes do not only influence sports culture. Their purpose goes beyond that. They have a strong power to change norms and culture surrounding political issues.